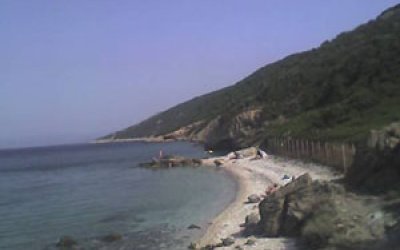 The Beach lies on a wild coast east of Marathonas, a coast so wild that Google Maps does not display any roads in the area. Take the road to Schinias, a large sandy beach. You will see a sign to Agyas Marinas FB, a ferry port. You might also see a sign to the archeological site of Ramnous, the Temple of Nemesis. On the road from Schinias to Agyas marinas you will see a left turn to Grammatico. Take it. Before you reach Grammatico you will see a a very sharp right turn, close to 145 degrees. The road is marked to Limounas . Coming from Grammatico you can see the sign. Coming from Aiyas Marinas you can’t see it, but it is the only turn on the road. There was also a crude hand-painted cardboard sign to Ramnous leaning up against the signpost for the official sign. After a mile the road becomes a dirt road, with rocks, ruts, holes, and the occasionally dizzying fenceless shoulderless dropoff to an abyss below. Continue for 4.2 miles and don’t lose hope. You will pass a left turn to Limounas (in Greek only); keep going straight. . You will see the archeological site in the distance, and then, at the bottom of a cove a white building and parked cars. Soon thereafter the road becomes crudely paved, and then it becomes dirt again, the scariest road I have ever driven, huge holes in the road and opportunity to plunge into the sea on the left. It is very steep. The white building and the parking lot are at the bottom of the road. Park and walk for about ten minutes along the coast with the sea on your left. You will pass two small textile beaches, and then clamber over the rocks to the first of three nude coves. Take your choice. All are beautiful, the sea crystal clear and easy to walk into (watch out for black sea urchins which are not too numerous but still a risk). The beaches are pebble beaches, not real sand. At the rear of the beach there is a fence separating it from the architectural site. Opening the fence would eliminate a very exciting drive..I would have said the coves were 100% nude until I found a gang of half a dozen clothed teeneagers in the last and most beautiful cove. [07/2007]

Schinias is a long sandy beach which ends on the north in a rock face. In general people along the rock face are nude. People on the sand are textile. [07/2007]