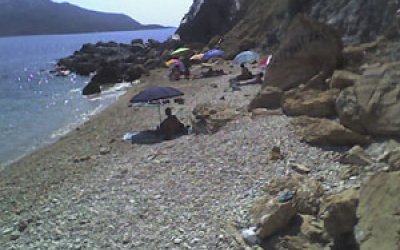 Take the road from Athensto Sounion. Just past km 63 you will see a right turn with some sign labeled #922; #902; #928; #917; Follow the road for 0.5 km. The road ends a bar with steps going down to a textile beach. At the far end of the bach (to the right as you face the sea) you will see a path leading over some rocks. On the other side of the rocks there is a small perfect pebbly beach. On a large rock someone has painted a big sign saying FKK and nude in Greek (Gymnos). There was one woman in a bathing suit being teased by her friends for clinging to her outmoded behavior. Everyone else was nude. Some people slathered themselves with mud from the shore, kept it on for a while, and washed it off in the water. The water was clear, there were no urchins, the view wonderful. I suspect that it would be very crowded on a weekend
[07/2007]

The Limonakia are
a series of coves just south of Voulagemini which is on the road from Athens to Sounion somewhat closer to Athens. There is a bus stop marked Limonakia, and a number of parking lots on the sea side. The cove at the bus stop is textile, but the others on either side are nude. There is no beach per se, but the rocks are relatively flat, with crevices in which you can jam a beach umbrella. The water is clear.
[07/2007]